In this notebook I'll create a word cloud visualization from words in reddit comments that were gilded at least 10 times from the beginning of reddit to February 2019. The comment texts come from the reddit dataset created and maintained by Jason Baumgartner (/u/Stuck_In_the_Matrix). The data can be queried via a web service on Pushshift.io or Felipe Hoffa's (/u/fhoffa) dataset made available on Google's Big Query service. I used the latter option running the following query, that processed 955 GB when run 2019-04-28.

It took only a few seconds, which is impressive considering the dataset comprises several billion records, but be aware that querying the whole reddit comment dataset can become expensive quickly.

In the code cell below, the Python libraries used in this notebook are imported, some variables set and the dataset loaded into a pandas DataFrame.

I added code to work around the issue that the spaCy language model en_core_web_lg (version 2.0.0) does not identify stopwords.

In the next step the comment texts are tokenized using the spaCy library for natural language processing. Note that an English language model is used for all comments. Empty tokens and tokens recognized as stop words or which contain non-word characters except whitespace will be ignored.

Tokens identified as adverbs, interjections, nouns, verbs are lemmatized, i. e. the dictionary form is used not the inflected form. For example is and are are represented as a form of be. Adjectives and pronouns are lower-cased except for I and proper names upper-cased, so they can easily be distinguished from homographs with a different part of speech.

Next we create a Counter object from the standard library collections module passing it the list of words to be considered for the word cloud. Then a WordCloud object, setting the mask parameter to a black image of Snoo, reddit's alien mascot. That object's fit_words method then gets called with the Counter object.

Finally, we use matplotlib to display the word cloud image in this notebook and add some explanatory text and credits to it. 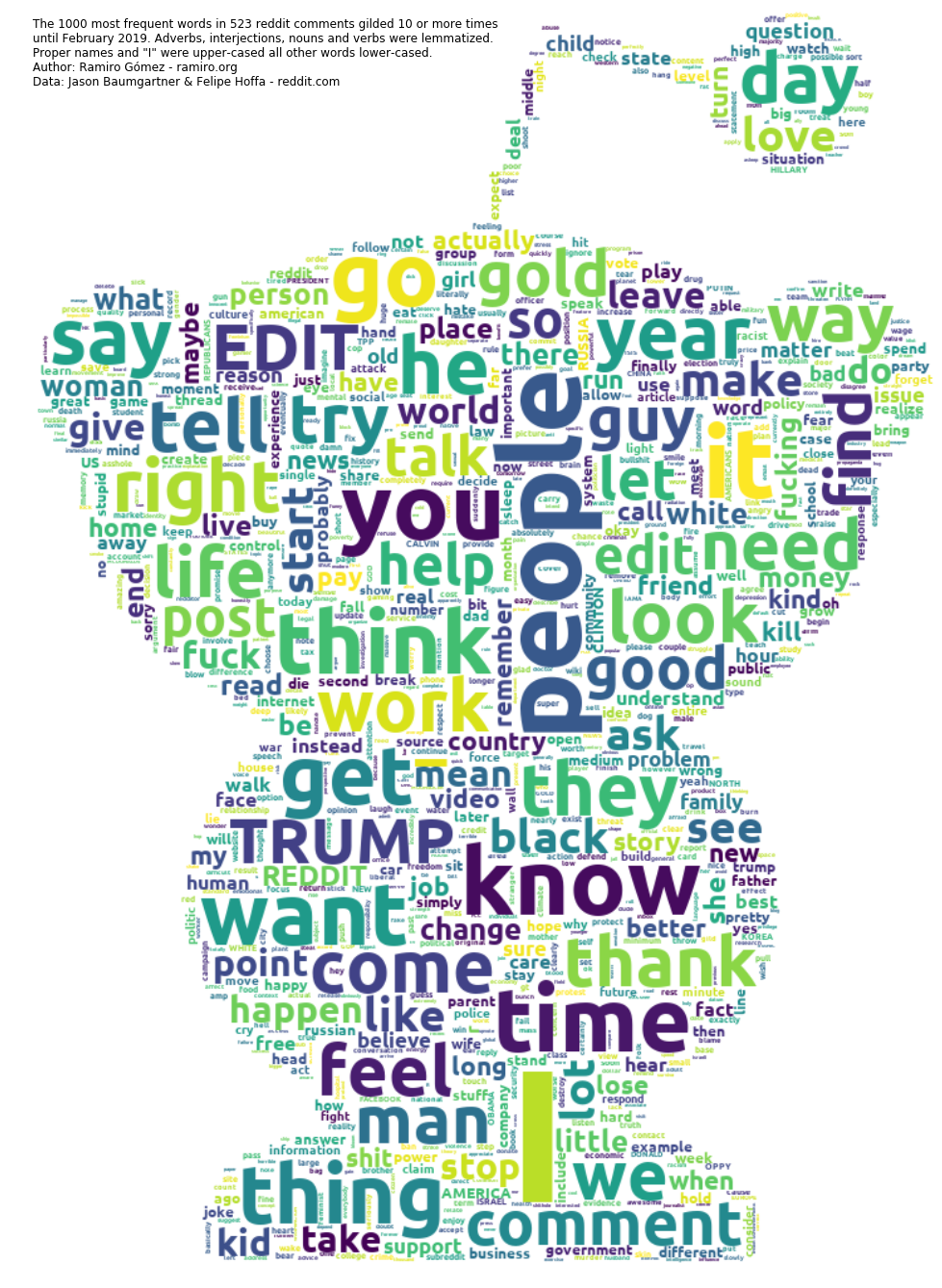 If you search for data visualization experts opinions on word clouds you'll probably come to the conclusion not to use them. There are certainly better ways to show frequencies, but I do think they have an artistic appeal and that's why I created this one.

That being said, if you are curious about which proper names occurred most often, check out the plain text output below. You can see that EDIT is frequently identified as a proper name. It is often used by redditors to show they edited the comment and to explain why or just to say thanks for the gold.