What Software Engineers Earn Compared to the General Population

In this notebook we'll compare the median annual income of software engineers to the average annual income (GDP per Capita) in 50 countries. It's shown how to scrape the data from a web page using lxml, turn it into a Pandas dataframe, clean it up and create scatter and bar plots with matplotlib to visualize the general trend and see which countries are the best and worst for software engineers based on how much they earn compared to the average person.

The data comes from PayScale and the International Monetary Fund and was published by Bloomberg in May 2014. It includes figures for 50 countries for which data was most available to PayScale. The software engineer figures represent income data collected from May 1, 2013, to May 1, 2014, and use exchange rates from May 5, 2014. The median years of work experience for survey respondents from each country range from two to five years.

First we load the necessary libraries, set the plot style and some variables, including a geonamescache object for adding country codes used to link geographic data with income figures in this interactive map.

To scrape the data from the web page, I looked at the source to determine a way to identify the data table. It is the only table on the page with a class of hid so the xpath expression below can be used to extract the table from the HTML source after it was loaded.

Pandas makes it easy to turn this raw HTML string into a dataframe. We instruct it to use the Rank column as the index and the first row as the header. The read_html function returns a list, in our case of one dataframe object, so we just grab this and print the first few rows

and the data types that were automatically determined by Pandas.

The output above shows, that we need to do some cleanup before continuing with further exploration. The values in the Country column all end in a space followed by a t, which we just remove. Also we need to turn the dollar amounts into a numeric type for use in calculations and plots.

This looks better now. As a sanity check we can test whether the ratio that is contained in the data agrees with the income numbers. To do so we calculate the ratio ourselves and compare it to the existing one.

To get a holistic view we first create a scatter plot with all 50 records showing the median software engineer income on the X axis and the annual average of the whole population on the Y axis. We also draw a quadratic polynomial fitting curve to see if we can spot a trend. 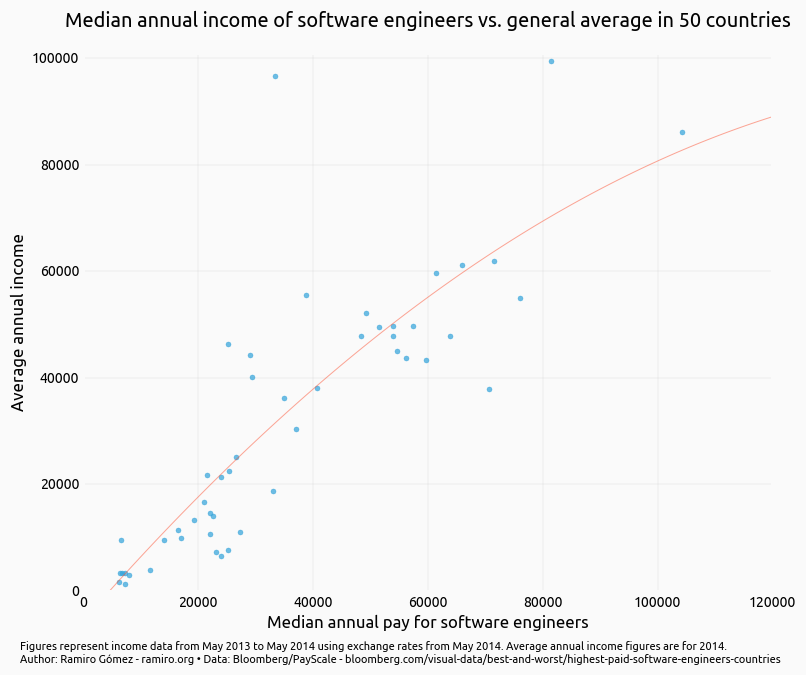 Before interpreting this and the following plots, I'll point out a few issues with the data. We do not know how many respondents took part in the PayScale survey and we do know that their work experiences range from two to five years. Whether this sample is a good representation for the income of software engineers in the respective countries is questionable.

In the following bar plot countries are ranked by the ratio of median software engineer pay to average income. Since our dataframe is already ordered by the ratio from high to low, we can simply use the head and tail methods to get the slices we want to show.

Now we create a plot consisting of two bar charts showing the best countries for software engineers on the left and the worst on the right based on income ratio.

This chart again shows that the income differences are huge in some countries and that software engineers are likely to earn more. In our dataset Pakistan and India are the two countries with the lowest average annual income and Qatar has the 2nd highest average income after Norway. I assume that the income distribution in countries with a high ratio is skewed towards lower incomes and in countries with low ratios towards higher incomes. Again, it'd be interesting to compare medians to medians and not medians to means, but we'd have to find another data source for such a comparison.

In this last short section, I'll show how to add ISO 3 country codes to our dataset in order to visualize the data in an interactive D3.js based map.

Here we use the geonamescache object initialized in the beginning to get a dictionary of countries keyed by names. The values are dictionaries as well, which, among other things, contain ISO 3 country codes. Finally, to save a few bytes the country column is removed and the dataframe saved as a CSV file.

In this notebook we looked at income data for software engineers in 50 countries and compared their earnings to the general population. In the process we scraped the dataset from the source web page, cleaned it up, visualized it and interpreted the results pointing out potential issues with the dataset and methodology.

While software engineer seems to be a good career choice in most of the countries, keep the caveats in mind before you start making emigration plans. Also, income should certainly not be your only criterion for choosing a profession or a place to live in.